THE ALPHA AND OMEGA OF HEALTH


Take as a dietary supplement 1-3 capsules softgels daily or as directed.

Researchers have been dealing with the question of whether there is a connection between diet and disease of the heart and vascular system and if there is, what type of correlation exists. Dyerberg and his colleagues have found that the Eskimos of Greenland have very low death rates from cardiovascular diseases in spite of having diet high in fat. The people in developed countries throughout Europe and America also consume a lot of protein and fat, yet their health is endangered by heart disease. How does one explain this? The difference is that the large amounts of protein and fat found in the food of the Eskimos originate from the sea, and they contain a lot of unsaturated, so-called omega-3 fatty acids. By eating ocean-fish, the Eskimos consume at least 10 times more omega-3 fatty acid than the people in Central Europe.

Consuming enough omega-3 fatty acid (5-8 g per day) is useful because it contributes to the maintenance of normal blood triglyceride levels, blood pressure and helps the healthy functioning of the heart and brain. In addition, it supports normal vision.

The omega-3 fatty acid (more precisely the docosahexaenoic acid - DHA) is also very important for embryos because it is required for proper development of the nervous system. Consequently consumption of this fatty acid by expectant mothers is highly recommended. Furthermore, the accretion of DHA in the brain progressively increases up to 18 yrs of age, so its intake has great significance even in childhood as it may support cognitive performance, learning abilities and memory.

The popularity of Omega 3 formulas has been undiminished for many years and what is more, it is growing continuously. According to the market data of Euromonitor International, one of the leading market research companies, the sales of Omega 3 ingredients grew by 10% between 2008-2009. As Omega 3 is the focus of interest in scientific circles and on almost a daily basis a new beneficial effect of it is discovered in studies we can state that today it has become both a dietary supplement and one of the most important raw materials of the food industry.Consequently, the victory parade of Omega 3 will presumably continue for many years to come. 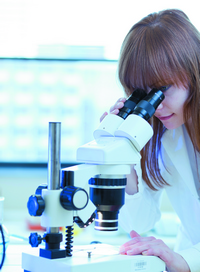 The expression Omega 3 (or n-3) means a group of unsaturated fatty acids in which the last double bond is found in a so called n-3 position. Many know only about eicosapentaeonic (EPA) and docosahexa-enoic (DHA) acids and that they belong to the omega-3 group. However, other omega-3 fatty acids exist, for example, alpha-linoleic acid and stearic acid which are important from a nutritional-physiological point of view.

Omega 3 fatty acids possess uncountable physiological benefits. Studies prove that they reduce blood lipid levels and also have a beneficial effect on the cardiovascular system such as against hypertension.

Furthermore, the so called eicosanoids developing from EPA alleviate inflammatory processes and these have proved to be effective in preventing some heart diseases (coronary diseases) as well as in treating arthritis, inflammatory intestinal diseases or even psoriasis. DHA “deposits” in cells  of the nervous system is of paramount importance in the prenatal period as well as in infancy and childhood as it is one of the key factors in the healthy development of the nervous system. The same property of omega 3 may also be important in old age against senile dementia. Further promising results have been reported in the complementary treatment of mental symptoms (for example depression).
It is possible that EPA and DHA are so well-known because their characteristic sources are certain kinds of fish.Therefore, in fish-oil formulas found on the market both of them have been included. It is important to note that fish oil does not only contain omega 3 fatty acids. The higher their ratio in one unit of fish oil, the more concentrated the product is.
The increasing popularity of omega 3 formulas required the development of technology as well. In the new, up-to-date formulas basic materials are purified by so called molecular distillation. This, as opposed to the previous methods is a low-temperature, very delicate process which protects fish oil from such harmful effects as oxidation, and consequently less antioxidants should be added to the end-product. Molecular distillation is not an inexpensive process but the result is a more stable, highly concentrated and pure fish oil.
The good news is that CaliVita keeps up with developments like Omega 3 fatty acids and as a result the popular Omega 3 capsule will be renewed soon. The more up-to-date Omega 3 will offer several advantages, and for details of these visit the web site of CaliVita International or ask your sponsor.
The expected yearly turnover of Omega 3 in specific regions.

With unsaturated fatty acids for a balanced diet

Due to the global obesity “pandemic” and the accompanying global desire to lose weight most people view fats as enemies, however it is important to know that just like proteins, fats are also indispensable for a healthy diet.